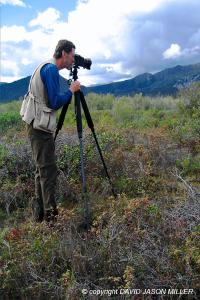 His love of natural places and their wild inhabitants stretches back as long as he can remember. Growing up, he spent countless hours wandering the mountains and streams of northwestern North Carolina, occasionally hunting, often fishing, sometimes merely enjoying being in the presence of nature. His interest in and connection with the natural environment was rekindled and strengthened in adulthood when his then five-year old son and he began what evolved into a nearly 20-year backpacking partnership, principally on sections of the Appalachian Trail from Georgia to West Virginia and Maryland, and occasionally on AT sections farther north.

Like backpacking, photography encourages a slower, more observant pace; he finds the two interests imminently compatible. Over time, as his son grew into adulthood and increasing responsibilities (and as he aged), photography became the primary focus of my time outdoors. Only later in life did he begin to market the results of his photographic efforts.

Though he enjoys photographing in many corners of the US and elsewhere, his work is concentrated on the southern Appalachian Mountains in general and the Blue Ridge region in particular. His photography encompasses both unspoiled—or at least naturally restored—sections of the southern Appalachians, as well as settings in which human influences, whether historical or present-day, play an important part. Regardless of the geographic area or subject matter involved, however, his photography is driven by two primary goals. First, he seeks to accurately and faithfully record his photographic subjects and share them, through the resulting images, with others. More importantly, he hopes to inspire at least some viewers of my images to a greater appreciation of and concern for those relatively few wild or largely unspoiled places that still exist in our nation.

He strongly believes that the quality of human existence would be significantly diminished if we had no undeveloped places to experience, no wild creatures to observe. He hopes that his photography helps encourage preservation and protection of such places by providing others the opportunity to view images of nature’s design.